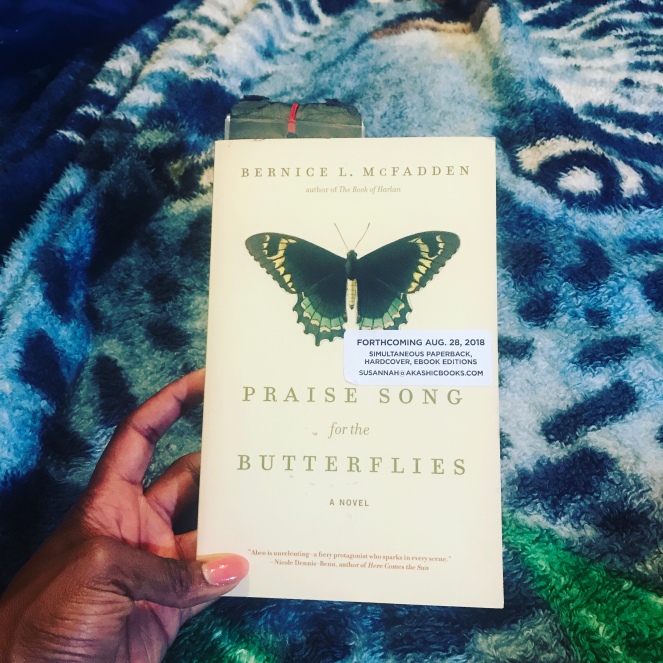 Abeo Kata lives a comfortable, happy life in West Africa as the privileged nine-year-old daughter of a government employee and stay-at-home mother. But when the Katas’ idyllic lifestyle takes a turn for the worse, Abeo’s father, following his mother’s advice, places her in a religious shrine, hoping that the sacrifice of his daughter will serve as religious atonement for the crimes of his ancestors. Unspeakable acts befall Abeo for the fifteen years she is enslaved within the shrine. When she is finally rescued, broken and battered, she must struggle to overcome her past, endure the revelation of family secrets, and learn to trust and love again.

I requested this novel after reading about it in an article on Facebook mentioning books to look forward to. Once I read the plot, I knew I would like it. I didn’t know how much it would intrigue me and keep me glued to its pages. This was a one sitting read for myself and I’m glad that I picked a long weekend to read it even if it only took me 2 hours to read it.

The opening of the story is so intense, but it does not prepare you for what is to come for the rest of the story. This is a story about love, abuse, sacrifice, and pain, and the path to healing.

Abeo is a young happy girl in Africa living what seems to be the perfect life with her family. They are wealthy, and they don’t need for much. Abeo’s family is visited by her Aunt Serafine who lives in the United States. Abeo’s life is easy even when her father is suspended from work. When Abeo’s grandfather dies and her grandmother comes to live with them, Abeo’s life begins to change in a way she does not see coming. Abeo’s grandmother believes and convinces her son to believe that Abeo is the reason for all their misfortune. She convinces him to basically give his daughter up to slavery to make his life better. This is not something he discusses with his wife. He just takes his child and leaves her in the hands of the devil himself and never looks back. Abeo was 9 years old.

At first Abeo’s mother is overcome with rage but she eventually comes around because she believes that it is her duty to follow behind the decision of her husband. For a while, life without Abeo starts to get better and her parents are convinced that the right decision was made. Soon enough, the luck runs out. Abeo’s mother dies. She dies before she ever sees her daughter again.

While the Kata’s are living their newly enhanced life, Abeo is living a life of hell. A life that she was thrown into without ever knowing why. She is a slave along with other young girls whose families have thrown them into the life of being a trokosi. They are beaten, fed enough to keep them alive and raped. Abeo must endure this for much of her childhood and the early part of her adult life. She doesn’t know anything about her family or their whereabouts. She just knows that this is the life her father has left her to. Abeo does try to escape but fails to no end. She takes beatings and soon must endure a constant stream of rape.

Finally, a woman name Taylor moves to Africa and opens a sanctuary and begins rescuing girls from the life of being a trokosi. Abeo is one of the women who is rescued but not after enduring the death of her son.

After Abeo is rescued, she must learn to love again and to function again in the real world. She is also reunited with who is left of her family. She learns of her mother’s death and she also learn her family’s other secret which will have a significant impact on her life.

Although this is a story of fiction, it is a story that needs to be told and put out into the world because this is happening everyday just like human trafficking. This story had me feeling so many emotions all at one time. I could not even keep up. I was angry, sad, happy, hurt, devastated. All of those within the two-hour time it took me to read it. I am still feeling those emotions even the next day. This story is going to stick with me for quite some time and I would actually want to look further into this heinous practice and see what it is I may be able to do to become more educated about it and lend my help.

I really loved the significance of the butterflies. You will have to read the book to see what I am talking about.

There are definitely some trigger warnings that come with this novel. It is not for the faint of heart.

I received this book in exchange of an honest review.

6 thoughts on “Praise Song for the Butterflies by Bernice L. McFadden {Review}”