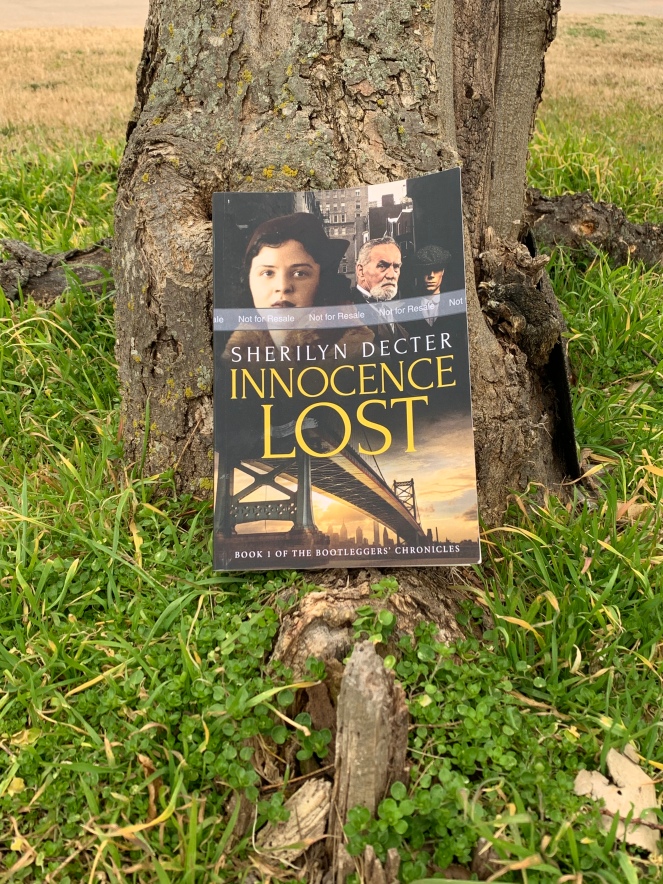 In a city of bootleggers and crime, one woman must rely on a long-dead lawman to hunt down justice…

Philadelphia, 1924. Maggie Barnes doesn’t have much left. After the death of her husband, she finds herself all alone to care for her young son and look after their rundown house. As if that weren’t bad enough, Prohibition has turned her neighborhood into a bootlegger’s playground. To keep the shoddy roof over their heads, she has no choice but to take on boarders with criminal ties.

When her son’s friend disappears, Maggie suspects the worst. And local politicians and police don’t seem to have any interest in an investigation. With a child’s life on the line, Maggie takes the case and risks angering the enemy living right under her nose.

Maggie’s one advantage may be her oldest tenant: the ghost of a Victorian-era cop. With his help, can she find justice in a lawless city?

Innocence Lost is the first novel in the Bootleggers’ Chronicles, a series of historical fiction tales. If you like headstrong heroines, Prohibition-era criminal underworlds, and a touch of the paranormal, then you’ll love Sherilyn Decter’s gripping tale.

What initially caught my attention with this novel is that it takes placed during Prohibition and the Roaring 20’s.  I love historical fiction and this is an era that I don’t have the pleasure of reading about enough.  Another thing that drew me to this story is that it is a self published debut and although I admittedly try to veer away from those types of novels, this one made me want to see what the author had in store.

The story opens with children being mischievous and getting into some trouble, although you don’t find out right away what that trouble is. Tommy and his friends are spying on men working in an illegal warehouse filled with booze. Bootlegging was a lifestyle that these young men unfortunately looked up to at that time. During this spying fiasco, we are introduced to an older cop by the name of Frank Geyer. Frank turns out to not be what you expect and I will admit that his part of the story was a bit more difficult for me to extend my mind to accept but I grew to appreciate Sherilyn’s approach with him.

The story begins to develop around the disappearance of a young boy who is from a neighborhood that is not so well off. Right away you see how the influence of money makes Philadelphia tick. The search for this young man is called off almost as soon as it started. This is when Frank has to employ the help of  Maggie Barnes, a widow and the mother of Tommy. She is just a single mom who is trying her best to take care of her son and make sure that they are safe. She has just recently decided to open her home to boarders in order to have some extra income for her and her son. You can see right away that she is not a weak woman and is willing to do what she can to make a way, while still being a lady.

I admired Maggie’s and Frank’s tenacity throughout the story even if the story went in a different direction than what I was expecting or wanting but that doesnt take away from the enjoyment I had while reading it.

I do believe that I will check out the other books in this series just to find out where things go with Maggie and also to see if they ever solve the crime of the missing boy.

Decter’s use of the language and phonetics during the 1920’s provides an entertaining backdrop. The descriptions of the women and the attitudes that men had toward them at that time provide another aspect toward the story considering the role that Maggie takes on with Frank. Decter has a very simplistic writing style and that makes this a light read even with the dark moments during the story.

I received this book to read and review for the Historical Fiction Blog Tour. I want to take time to thank Amy Bruno and Sherilyn Decter for this opportunity to provide my honest opinion.

Watching Bones on my lunch break and wondering if I can possibly squeeze this book in this weekend. I think I’m going to try. Who doesn’t like a good true crime book?