Beloved Georgia judge Joseph Donaldson was known for his unshakable fairness, his hard-won fortune–and a scandalous second marriage to his much-younger white secretary. Now he’s left a will with a stunning provision. In order to collect their inheritance, his lawyer daughter Maya, her stepmother Jeanie, and Jeanie’s teen daughter, Ryder, must live together at the family lake house. Maya and Jeanie don’t exactly get along, but they reluctantly agree to try an uneasy peace for as long as it takes…

But fragile ex-beauty queen Jeanie doesn’t know who she is beyond being a judge’s wife–and drinking away her insecurities has her in a dangerous downward spiral. Fed up with her mother’s humiliating behavior, Ryder tries to become popular at school in all the wrong ways. And when Maya attempts to help, she puts her successful career and her shaky love life at risk. Now with trouble they didn’t see coming–and secrets they can no longer hide–these women must somehow find the courage to admit their mistakes, see each other for who they really are–and slowly, perhaps even joyfully, discover everything they
could be.

A story about grief and how three women who loved the same man in different aspects deal with his unexpected death.

Maya, who is Judge’s daughter from his first marriage has now lost both parents and the grief of her father’s passing is devastating. But because of the morals and ethics her father instilled in her, she pushes forward and her grieving is limited. This is a situation that a lot of people find themselves in and don’t really know how to handle their grief and because of that, their grief bleeds into other parts of their lives.

Jeanie who is Judge’s second wife has let grief completely overtake her to the point of self destructive behavior. I could almost relate to the pain that she was going thru even though at times I felt she was playing the victim a bit too much at times.

Ryder who is Jeanie’s daughter and Judge’s stepdaughter is caught between her own grief and hiding her mother’s destructive behavior from Maya.

Each woman must learn how to grieve and how to get along. Maya and Jeanie must learn how to do this without depending on Ryder to be their buffer. She has her own issues as a teenager to deal with on top of losing the man she knew as her father.

This was a good story to show that people deal with grief differently and that families can still come together. Having lost both of my parents this was a story that I could definitely relate to.

A special thank you to Suzy’s Approved Book Tours for having me on this tour and to Kensington Books for my free copy in exchange for an honest review. 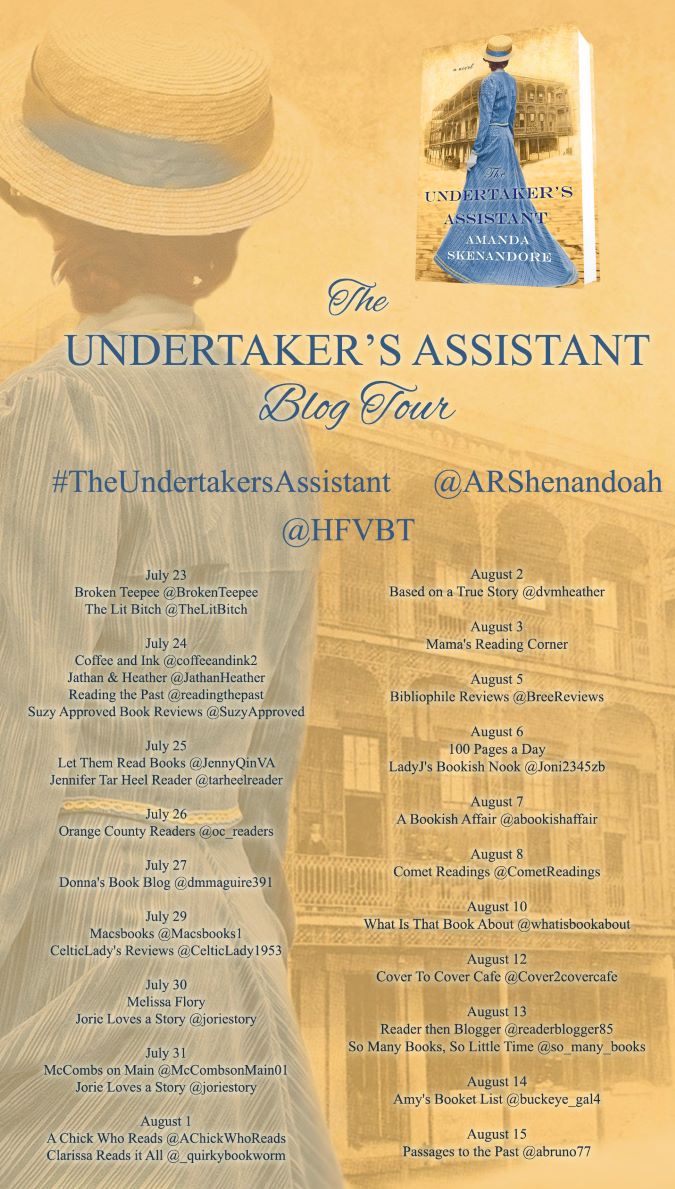 Effie Jones, a former slave who escaped to the Union side as a child, knows the truth of her words. Taken in by an army surgeon and his wife during the War, she learned to read and write, to tolerate the sight of blood and broken bodies–and to forget what is too painful to bear. Now a young freedwoman, she has returned south to New Orleans and earns her living as an embalmer, her steady hand and skillful incisions compensating for her white employer’s shortcomings.

Tall and serious, Effie keeps her distance from the other girls in her boarding house, holding tight to the satisfaction she finds in her work. But despite her reticence, two encounters–with a charismatic state legislator named Samson Greene, and a beautiful young Creole, Adeline–introduce her to new worlds of protests and activism, of soirees and social ambition. Effie decides to seek out the past she has blocked from her memory and try to trace her kin. As her hopes are tested by betrayal, and New Orleans grapples with violence and growing racial turmoil, Effie faces loss and heartache, but also a chance to finally find her place . .

I really didn’t know what to expect coming in to this story. I’m a sucker for a good historical fiction and I admit I had some reservations about the author telling the story from freed woman’s perspective. She surprised me with how well it was written. The feelings and things that Effie experienced were valid and also relatable. She dealt with prejudices because of the color of her skin from whites and because she was a “northern” black woman she also deals with prejudices from the black community. She struggled with trying to find where she fit in while also learning how to deal with feelings for one of the first times in her life. Orphaned as a slave, and then later being betrayed by the man who took her in. At almost every step she feels like she doesn’t belong.

Effie has been on her own so long that she doesn’t really know how to make friends or fall in love. She also has trouble with learning about her employer’s true feelings about civil rights. Effie also must learn how to build healthy friendships and relationships. She finds a friend in a person she least expected and she also experiences heartbreak for the first time. All issues that women deal with in the present. Effie comes face to face with her past in such a way that tests her emotionally and mentally.

While Effie has come to the south to find out where it is that she came from and to find out if she has any family left, she also learns how to be true to herself and accept love and friendship.

Available now in paperback and ebook

Thank you Historical Fiction Virtual Tours for having me along on this book tour and Kensington books for my review copy.

Hadn’t put anything on the blog in a minute so I thought I’d drop a post today.