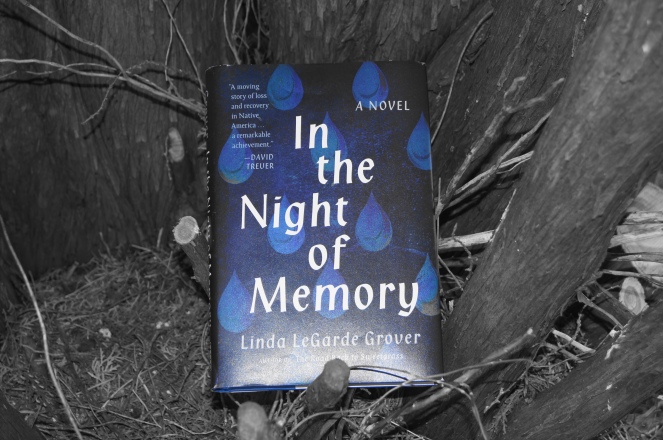 Two lost sisters find family, and themselves, among the voices of an Ojibwe reservation.

When Loretta surrenders her young girls to the county and then disappears, she becomes one more missing Native woman in Indian Country’s long devastating history of loss. But she is also a daughter of the Mozhay Point Reservation in northern Minnesota and the mother of Azure and Rain, ages 3 and 4, and her absence haunts all the lives she has touched—and all the stories they tell in this novel. In the Night of Memory returns to the fictional reservation of Linda LeGarde Grover’s previous award-winning books, introducing readers to a new generation of the Gallette family as Azure and Rain make their way home.

After a string of foster placements, from cold to kind to cruel, the girls find their way back to their extended Mozhay family, and a new set of challenges, and stories, unfolds. Deftly, Grover conjures a chorus of women’s voices (sensible, sensitive Azure’s first among them) to fill in the sorrows and joys, the loves and the losses that have brought the girls and their people to this moment. Though reconciliation is possible, some ruptures simply cannot be repaired; they can only be lived through, or lived with. In the Night of Memory creates a nuanced, moving, often humorous picture of two Ojibwe girls becoming women in light of this lesson learned in the long, sharply etched shadow of Native American history.

What drew my attention to this novel is the storyline and the voices that the story is told thru. I have not had the priviledge of reading many stories told from a Native American’s point of view. I feel that it is important to know how a system like foster care works in different communities.

Another subject that is mentioned throughout the story and also has an impact on the girls’ lives is alcoholism. Their mother was an alcoholic and Junior is a recovering alcoholic. Alcoholism in the Native American community is prevalent and also can be seen as a generational curse as well.

What I loved most about this story was how each point of view that it was told from gave you an insight of the girls as well as their family history. This isn’t brightest and sunniest story but the love and lives that they end up experiencing are much better than what they started out with.

Azure and Rainy have the most beautiful relationship with each other and serve as backbones for one another throughout everything they experience. Azure falls into the role as the older sister even though she is the younger sister. They share a single memory of their mother that stands out to both of them. As they get older, you see the effects of what they have been thru and how it has effected them, especially in Rainy.

I highly recommend this story even if it isn’t light and fluffy.

Thank you Bookish First for this copy and also University of Minnesota Press.