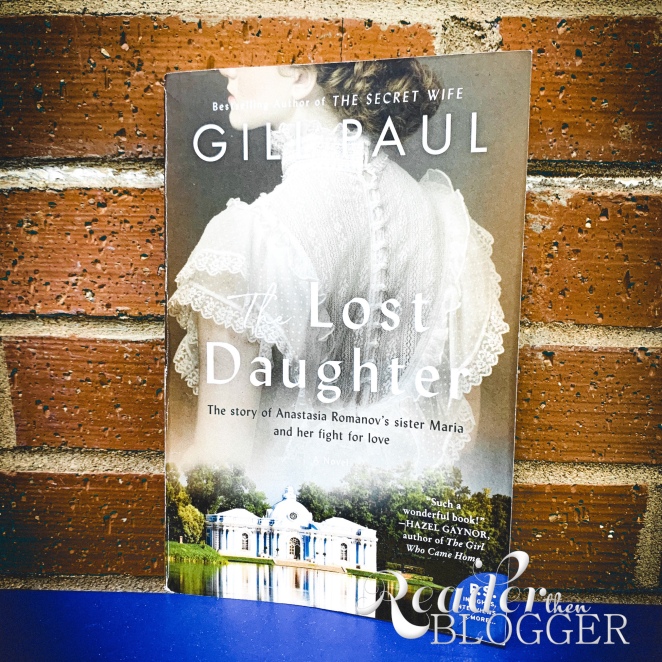 1918: Pretty, vivacious Grand Duchess Maria Romanov, the nineteen-year-old daughter of the fallen Tsar Nicholas II, lives with her family in suffocating isolation, a far cry from their once-glittering royal household. Her days are a combination of endless boredom and paralyzing fear; her only respite are clandestine flirtations with a few of the guards imprisoning the family—never realizing her innocent actions could mean the difference between life and death

1973: When Val Doyle hears her father’s end-of-life confession, “I didn’t want to kill her,” she’s stunned. So, she begins a search for the truth—about his words and her past. The clues she discovers are baffling—a jewel-encrusted box that won’t open and a camera with its film intact. What she finds out pulls Val into one of the world’s greatest mysteries—what truly happened to the Grand Duchess Maria?

I absolutely love a historical fiction with a duel timeline. Nothing like the build up of the different stories and the satisfaction when they tie together at the end. That’s exactly what this book did. And not only that, it was different from my usual WW2 reads.

I have heard the Romanov family story but most of it has been based around Anastasia. I had not known much about the rest of her family, especially her siblings. So of course I had to jump at the chance to read this story.

I found this story about Maria to be so intriguing. Along with the storyline of Val who is the character in more recent times. Not necessarily present day because her story mostly takes place in the 70s-80s.

Both women face adversity and hardships that they have to fight thru. Maria is separated from the family she loves so dearly, but does manage to make a family of her own. She still experiences pain just when she thought she was done experiencing pain. Val is in a situation that is both infuriating and heartbreaking but she finds the strength to remove herself from it and find her own voice and ground to stand on.

This is a story based on love, survival, and sacrifice. There are also secrets that are kept but need to be told in order for some to heal.

I thoroughly enjoyed it and blew thru it. I recommend it if you are a historical fiction fan and want a bit of a break from WW2.

A special thank you to William Morrow for my gifted copy and opportunity to read and review this story.