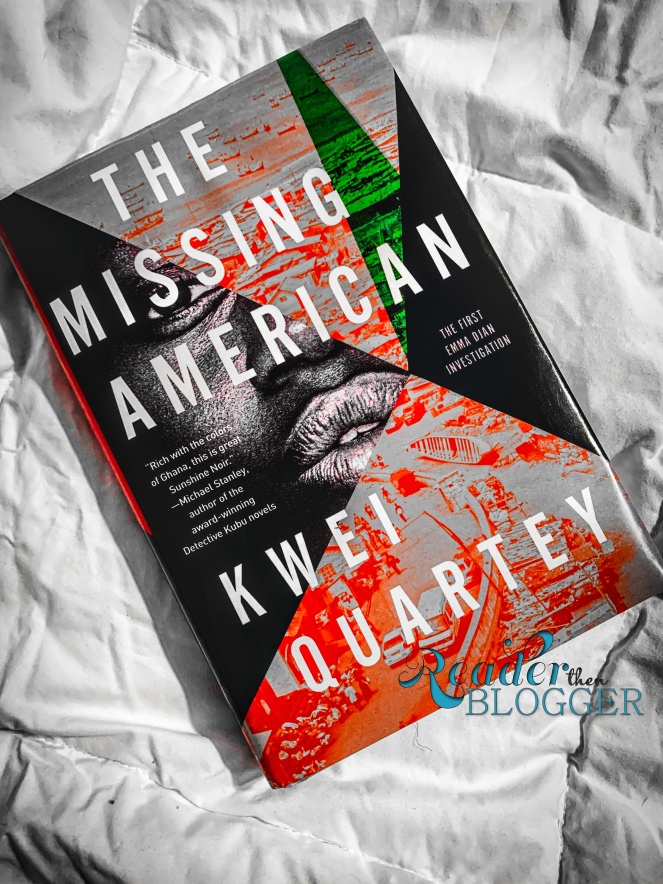 When her dreams of rising through the police ranks like her late father crash around her, 26-year-old Emma Djan is unsure what will become of her life in Accra. Through a sympathetic former colleague, Emma gets an interview with a private detective agency tracking down missing persons, thefts, and marital infidelities. It’s not the future she imagined, but it’s her best option.

Meanwhile, Gordon Tilson, a middle-aged widower in Washington, DC, has found solace in an online community after his wife’s passing. Through the support group, he’s even met a young Ghanaian widow he really cares about, and when her sister gets into a car accident, he sends her thousands of dollars to cover the hospital bill—to the horror of his only son, Derek. When Gordon runs off to Ghana to surprise his new love and disappears, Derek chases after him, fearing for his father’s life.

The case of the missing American man will drag both Emma and Derek into a world of sakawa scams, fetish priests, and those willing to keep things secret through death.

I want to start off this review by saying that I usually try to steer clear of series, but I allowed myself to get sucked into this story and I am not mad about it. I am only mad that I have to wait for the next one to come out.

I loved the different perspectives that you see throughout the story. Quartey writes most of the story from Emma’s point of view. Even though he is a male writer, I feel that he did an excellent job. He was able to write about her feelings and insecurities without making her seem whiney or needy. He was also able to write her as a strong-willed woman without making her seem too aggressive. Most male writers are not able to do that with a main female character. That is always something that I am hesitant about when reading a story told from a woman’s perspective but written by a man.

The mystery that surrounds the story of the sakawa and the involvement of Gordon was engrossing. You immediately find yourself trying to protect the innocent involved while also wanting to shake some sense into them. This story showed how Americans can easily find themselves in false security. That is what put Gordon in his situation. The sakawa are trained enough to be able to spot this in their victims.

While this is happening, Emma has her own conflict to deal with and own decisions to make about what is going to happen in her life and with her career. She doesn’t let an inconvenient detour lead her from her dream. She just begins a new road to get there. And while doing so, she discovers even more strengths about herself.

I highly recommend this story to anyone who loves a good mystery that will keep you thinking and engaged. Everything is not what it seems in this story. I am too excited about the next installment but until then, I am hoping to get my hands on Kwei Quartey’s previous works.

Available now in hardcover and ebook

I would like to send a special thank you to Kwei Quartey for sending me a gifted copy of this book in exchange for an honest review.